A cache allows applications to store results from expensive data operations (e.g., a database call or web service request) so they can quickly accessed if requested multiple times.

The Telligent cache object is built by combining one or more layers together to form a single logical structure. Each layer sits atop another, creating a hierarchy that defines how requests are satisfied: 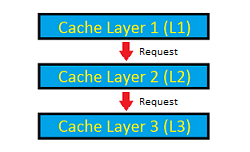 When a retrieval request comes in, each layer is searched until the item is found. If the item is found, that item is copied to all layers above the cache that satisfied the request. This allows cached objects to move from slower caches to faster caches, maximizing locality principles and reducing global system stress. 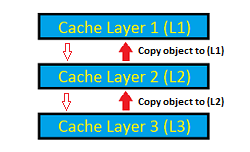 Each layer in the hierarchy defines how it caches objects. A layer specifies its supported caching behavior by using one or more CacheScope values. Only requests containing the supported scope will be sent to a provider.

The Telligent cache object comes with built-in providers that are available for use. They include:

When items are placed into cache, it is not necessary to give a timeout. In these cases, the currently configured default timeout value is used. The out-of-the-box default timeout is 1 minute and 40 seconds.

Default timeouts are set inside of the caching configuration XML settings. For more information, please see the Configuration documentation.

Cache factors allow us to complete the picture of how long items should be cached. Cache factor values can be set for any cache layer and is used as a universal adjustment on timeout.

Where cache factors become important is when a cache is set up using a distributed cache. For example, assume we have a website that contains many nodes (webfarm). Each node is running the AspNetCache provider to cache items locally on each server. Because we're in a webfarm scenario, we have to reduce our default timeout because we can't risk staleness and other cache inconsistencies.

It should be noted that all timeouts are subjected to the factor, not just default timeouts.

Cache factors are set inside of the caching configuration XML settings. For more information, see the Configuration documentation.

Included in the Telligent cache system is a mechanism allowing runtime adjustments to be made to cache operations. This allows users to modify values used in Community Server (or added by a third-party component) if they have a site-specific need to do so. Overrides should be used sparingly, but they offer a level of control that may yield a large benefit.

Before an item is sent to any cache layer, conditions are checked to see if a particular override should be applied. If a condition is met, that override is triggered and no further conditions are processed. This means that only one override can be executed for each cache operation.

Conditions can be defined using any of the following constructs:

Overrides are defined declaratively using XML. For more information on how to set and configure overrides, see the Configuration documentation.