It can provide a sampling of ideas from across the community on the Ideas home page in the Ideas - Browse Challenges widget, or let a user propose an idea in the Ideas - Create Idea widget. 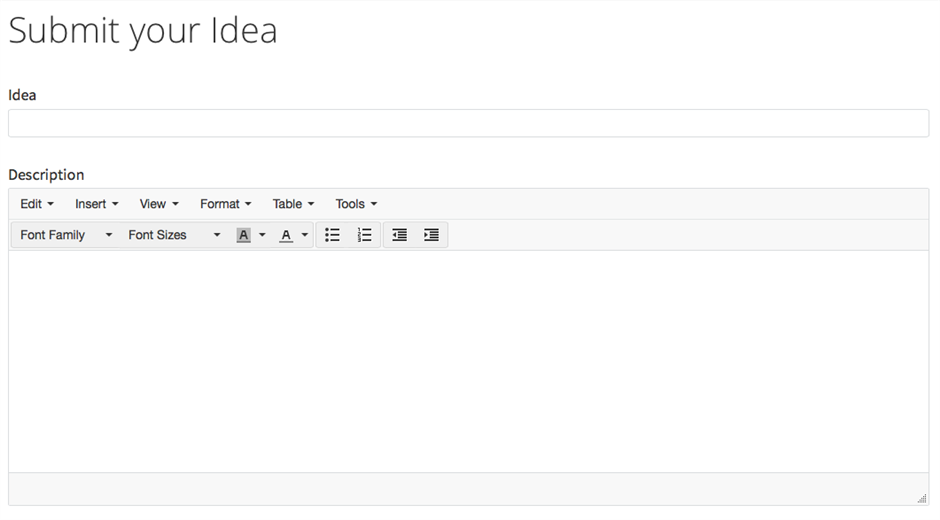 Ideas are enabled using the Ideas plugin in the Administration panel.

You can use the Ideas application to create challenges (for example, who has the best solution to x problem?) that members answer by posting ideas to solve the problem. Or you might pose an open-ended question (such as, What do we add in the next product iteration?) to be answered with ideas about the product. You can have multiple challenges going at the same time.

Ideas can be customized with a look and feel that will encourage innovation and community participation for your groups. I(Note: the "Ideas" title cannot be changed.)

The best way to see the features of the new Ideas application is to examine how the life cycle of an idea works in your community.

Life cycle of an idea

In the first stage, a user with the Manage Challenges permission creates a challenge.

Add a title and description in the Ideas - Add/Edit Challenge form. 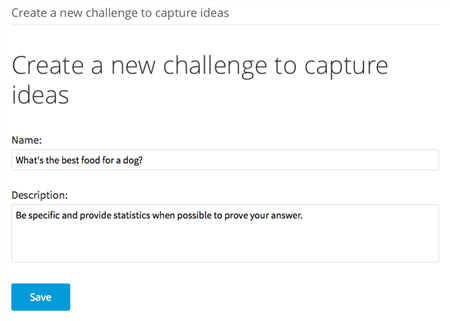 Once the challenge is created, it will be shown in the challenge list for users to browse and answer. The list looks similar to the following capture:

When a user finds a challenge he/she wants to answer, he/she clicks the challenge. In the Create Idea window, the user adds a headline and some text (only the headline is required). Note that the idea can be presented with all of the standard text editing capability available in Community Server's rich text editor, including with mentions and hashtags.

After clicking Save, the idea now appears in the group activity stream and in the idea list, where users can browse ideas.

Users can pick out an idea to view from this list, or they can also view similar content to this idea - other ideas or other posts in blogs, forums, media galleries, and wikis - in the Similar Content with Ideas widget. (This widget is similar to Recommended content, but also includes ideas.)

The author can then edit the idea to include any requested details or clarifications. Note that comment authors cannot delete their own comments, but administrators and group owners can delete them.

Comments can be liked. (Ideas themselves can't be liked because a like is much like a vote.)

Usually in tandem with browsing ideas, users with permission (note: anonymous users can only read ideas by default) can vote an idea up or down. Each kind of vote - up or down - requires a specific permission to vote. In this way, community administrators can control the voting environment.

If only one permission (such as voting up) is given, the user will see the opposite button (for example, vote down), but will not be able to click it. A no permission to vote message is displayed.

When group owner(s) decide that enough votes have been cast, they can triage ideas. To do this, they need the Vote on Ideas permission and Manage Idea Status permission in order to manage  status.

When an idea administrator edits the idea, he/she is presented with a status drop-down and Status Notes field on the idea.

The Under Review, Coming Soon, Not Planned and Complete statuses do not change the behavior around the idea. The idea can still be viewed even for example if it is complete, and votes can be cast toward the idea. However, the statuses do affect metrics (Idea Status metric and Idea Votes metric) that contribute to a new Top Idea Score in this release and can be applied to other scores. Note that in release 9.0, you can create custom statuses for ideas.

Idea authors are automatically subscribed to:

Idea commenters are automatically subscribed to future comments on the idea where they commented.