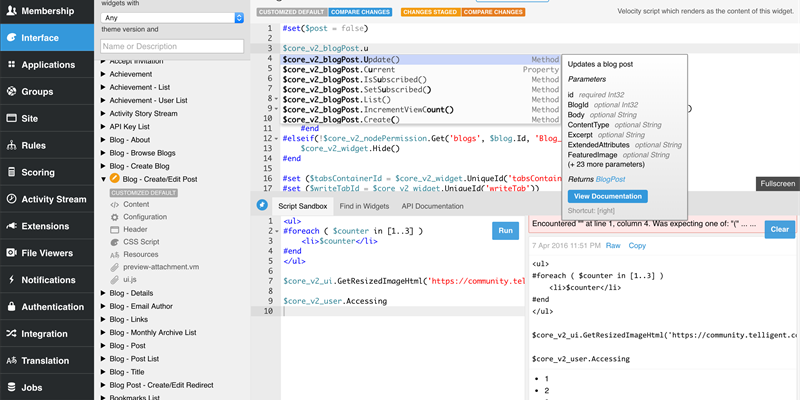 Since the release of Telligent Community 9.0, we’ve received feedback from developers on how to further improve the widget editing experience. Among these improvements are autocompletion and documentation improvements, immediate script evaluation, and advanced global search. Most of these are now available in Telligent Community 9.1, while some are coming soon in version 9.2. 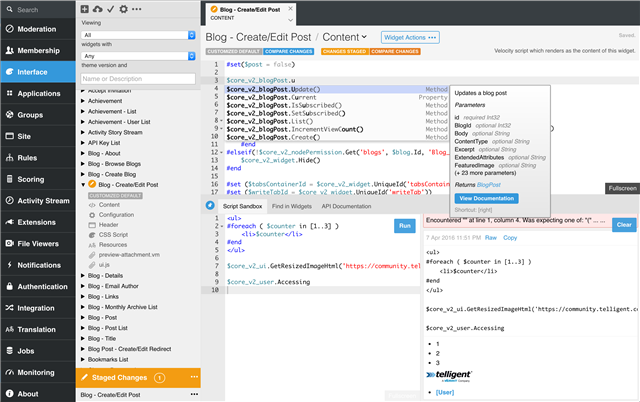 While velocity script (the primary language in which widgets are written) provides access to the platform API in the form of widget extensions, it can be challenging to remember API names and parameters. Widget Studio now provides autocomplete suggestions while typing.

While typing, Widget Studio will automatically suggest API extensions, methods, and properties, as well as listing parameters supported by a selected method. These suggestions include abbreviated summaries of the associated documentation with links to view more in-depth documentation.

Not only do API suggestions include all built-in platform APIs, but they also include installed custom extensions and widget-specific private APIs exposed to the current widget if that widget is from a scripted plugin extension.

When methods are selected from suggestions, their entire signature (including all possible optional parameters) are completed. This behavior can be configured in Widget Studio Settings.

In addition to API suggestions, Widget Studio suggests completions of other variables, strings, and tokens previously used in a document.

Widget Studio also suggests snippets of velocity directives, like #if, #set, #foreach, and even Telligent-specific directives like #registerEndOfPageHtml. Snippets apply a template form of the directive with slots to fill in. For example, typing #for<tab>, will initiate snippet completion of a #foreach loop.

Autocompletion is included in Telligent Community 9.1. 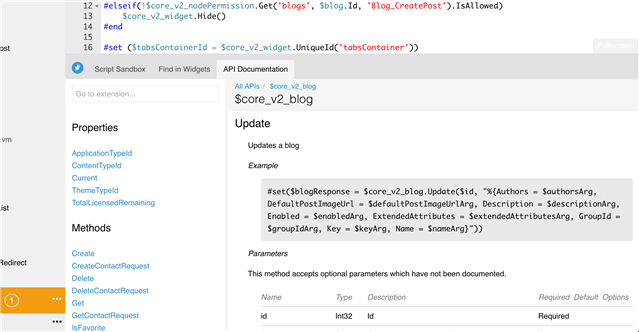 Like API autocompletion, the documentation panel includes all built-in platform APIs, any installed custom extensions, and any private APIs exposed to the currently viewed widget if that widget is from a scripted plugin extension.

The documentation browser is linked to from API autocompletion suggestions. API documentation is also searchable, and includes content and links to basic widget editing documentation.

The new documentation browser is included in Telligent Community 9.1.

Another common developer tool is an immediate window to experiment with and evaluate code snippets. Widget Studio now includes a Script Sandbox as a dockable panel in Telligent Community 9.1.

The Script Sandbox enables you to test velocity script (including embedded HTML, velocity directives like #for loops and #if branches and even widget API calls) in an ad-hoc manner. 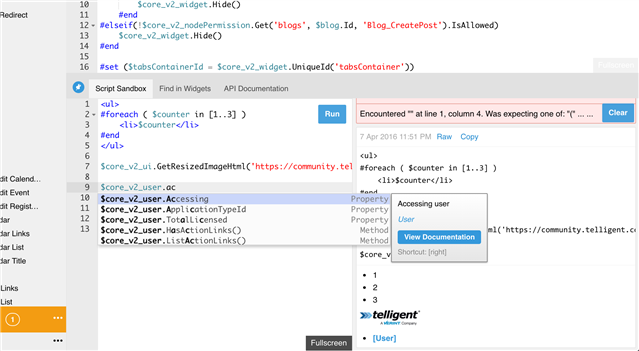 Unlike widget rendering, exceptions raised during script evaluation are not logged in the community exception report, but are instead listed directly within the sandbox’s log with details.

Also unlike widget rendering, objects returned from methods or properties are rendered as trees which can be navigated into for inspection.

Like the documentation panel, the Script Sandbox is resizable and can be pinned open or hide automatically.

The Script Sandbox is included in Telligent Community 9.1.

While the search component of Widget Studio’s widget browser included in Telligent Community 9.0 is useful for quick navigation to widgets and their components, it is not designed as a useful tool for searching widget sources. Developers often need traditional searching across files. For example, search can be a useful tool for investigating other uses of an API or for locating the widget implementation of a portion of the UI based on a known language resource string. 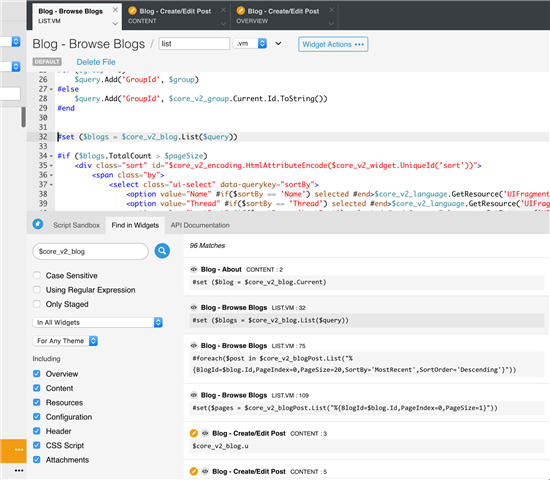 Widget search supports searching across various scopes, including the current widget (matching any currently focused editor tab), across all widgets, and any subset of all widgets, scoped by default or custom state, factory default provider, and theme.

Widget search can also scope its results by widget component types, such as content, configuration, attachments, and language resources.

Widget search will be included in Telligent Community 9.2.

Other improvements and bug fixes

If you haven't already, try Telligent Community 9.1. Thank you for your continued feedback. If you have questions, please join the discussion on the developer forum.